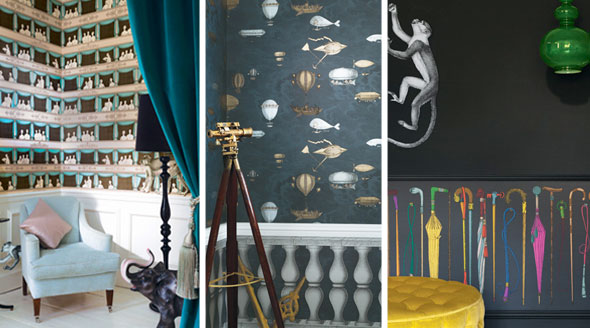 Cole & Son have been designing and manufacturing unique and beautiful collections of fine, traditionally printed wallpapers and wall coverings since 1875.

Cole & Son’s wallpaper collections are exciting and contemporary in feel yet, they employ traditional printing methods such as block printing, screen printing, flocking, surface printing and custom made stripes to produce innovative and beautiful designs.

Throughout the 19th century Cole & Son printed for all the large well-known companies of the time including Jeffrey & Co, Sanderson and Shand Kydd. In addition to high quality block printing, the company was renowned for supplying beautiful stripes and jaspes.

In the early days the company built machines that allowed the re-introduction of the process of pan coating and also revived the process of flocking, invented in Holland in 1680, imitating cut velvet.

Cole & Son has provided wallpapers for many historic houses including Buckingham Palace, The White House and the Houses of Parliament and has been appointed by Her Majesty The Queen, as a supplier of wallpaper.